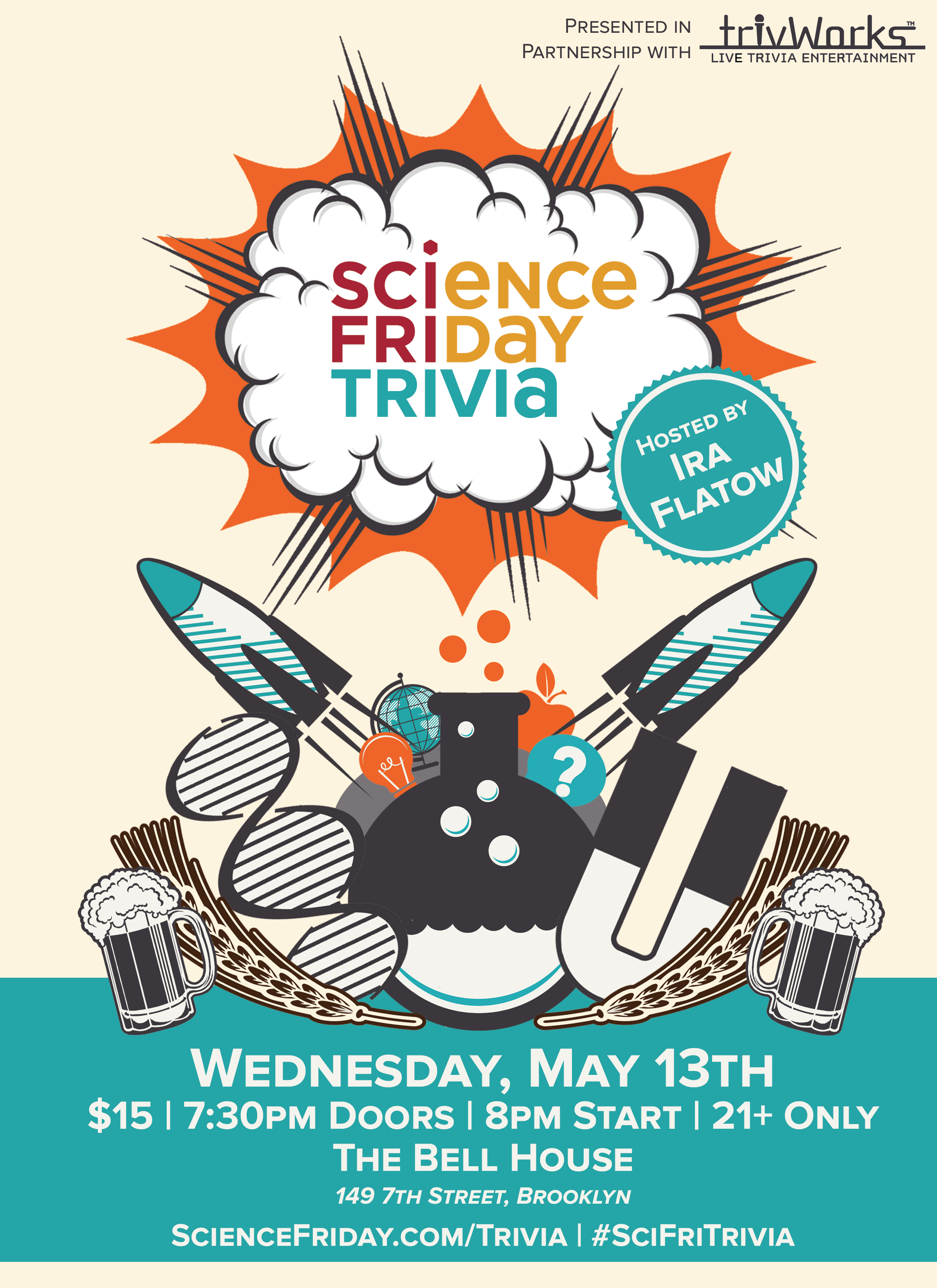 On Wednesday, May 13th, TrivWorks had the honor of co-producing Science Friday’s first-ever trivia night. Over 200 hardcore science lovers jammed The Bell House in Gowanus, Brooklyn for an evening of laughs, drinks, socializing, and of course multiple rounds of fun & challenging trivia crafted just for them!

Designed as a fully-immersive brand engagement experience using live trivia, upon arrival our attendees were greeted by the friendly SciFri team in their branded T-shirts, who then helped pass out answer packets, pens, raffle tickets and a variety of free “chum” graciously donated by partner organizations. With theme-appropriate music pumping through the speakers (She Blinded Me With Science, Starman etc.) people were encouraged to grab drinks from the bar – including the specially-formulated cocktail of the evening, the “Microbiome.”

Once packed to capacity – including “professional” teams made up of staff from other prestigious science outlets/organizations including Popular Science, Scientific American, SPACE.com/Live Science, Business Insider and the American Museum of Natural History (AMNH) – Science Friday staff member & professional comedian Jen Connor warmed up the crowd, before inviting host Ira Flatow to the stage to a rock star’s welcome:

After some brief banter, including highlighting the good-natured Twitter taunts which appeared online in the hours before the event, Ira & Jen dove right in to four full-room rounds of trivia, with themes including the locally-friendly “Science Around New York City,” “Pure Science, No Humanities,” an audio round of popular science/science fiction TV & movie theme songs, and a challenging “Science Fiction vs Science Fact” round.

In between rounds while over 50 teams’ score sheets were graded, Ira and Jen had some fun with the crowd, including inviting a lucky audience member onstage to be “interviewed” by Ira, raffles, a real-time Twitter trivia challenge, and a contest to determine the best team name – all the while handing out great theme-appropriate prizes graciously donated by SquareSpace and Lumosity. The event concluded with a tiebreaker question, with the top two teams being invited onstage for a high-stakes “grand finale” to determine the overall winner. For our “professional” teams in attendance, the “losing” team took home a stack of Business Insider stickers – however, the “winning” professional team got something even grander: an autographed & framed photo of Ira Flatow!

On behalf of TrivWorks, I would like to thank the incredibly dedicated and creative team behind Science Friday for making this special event a reality, as well as host Ira Flatow, co-host Jen Connor, our venue The Bell House, our incredibly generous and fun-loving prize partners/”professional” organizations who helped hype the event – and of course, all of the raucous science lovers who made for an extremely high-energy & memorable event!

We hope to do this again sometime! Here’s the final scores/standings: