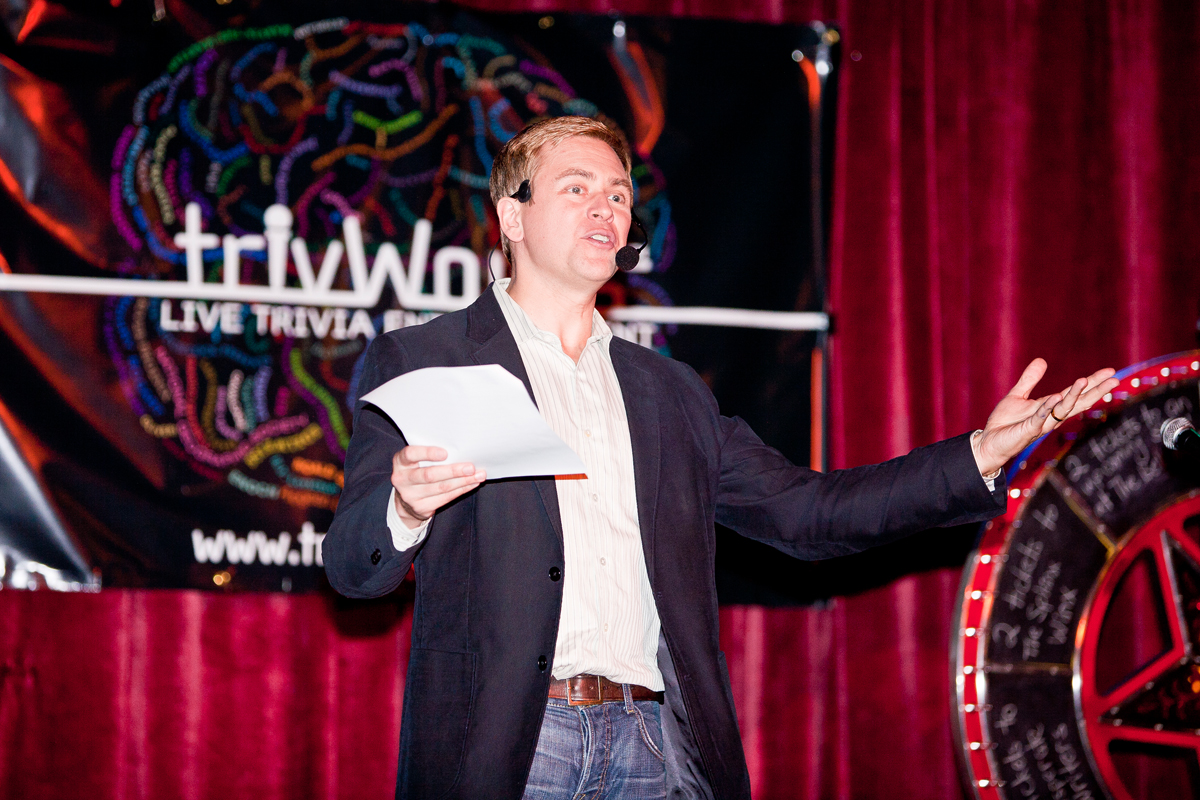 We’re a little more than a month away from our next mega trivia night at The Bell House in Gowanus, Brooklyn hosted by beloved NY1 morning news anchor Pat Kiernan – our annual “red carpet” awards-themed pop culture trivia contest on March 2nd (click here to learn more!). One question I’m frequently asked by people inquiring about NYC corporate entertainment activities, as well as just folks I meet socially: how did this come to be?

Though I’ve touched on it in the past here on my blog, I don’t know if I’ve ever given the full story – so, here it goes!

Back in 2010, not long after I had launched TrivWorks as a side business in response to the global economic crisis, I was stunned to receive a message on Twitter from @PatKiernan. Like most New Yorkers, I of course knew Pat as the legendary morning news mainstay who provides us with a smart & cheery wake-up, including his popular “In the Papers” segment. I also knew him as the former host of VH1’s The World Series of Pop Culture, a wildly popular game show tournament which aired nationally for two seasons, centering around fun questions about TV, movies, music, celebrity news and more. He was eager to capture the energy and excitement he enjoyed so much with WSoPC in a live event format, and felt what I was doing with my company specializing in professional trivia events in New York City and beyond was a great fit.

We met up, and after several months of careful planning we announced an official partnership in early 2011: Pat Kiernan was now a TrivWorks “Special Host,” available to emcee select marquee trivia events for corporate audiences. There was a great response from both Pat’s fans as well as the press, as this would be something completely new on the company event entertainment and employee team building scene.

Pat and I were both excited about this new endeavor, yet at the same time there seemed to be something missing. While great for the lucky staff and clients of companies who chose to hire us, because our events were private by nature, the vast majority of Pat’s robust following didn’t have access to enjoy this highly unique experience. Was there something else we could be doing, to broaden the availability of our collaboration?

At the time of our partnership announcement, I just happened to be hosting a monthly pub quiz night at a nearby venue to my home in Park Slope, in a relatively new space called The Bell House. A large converted warehouse with two distinct spaces – a cozy “Front Lounge” bar, and a massive, multi-use performance space in the back – Bell House was looking for fun, quirky ways to utilize its rooms beyond the traditional go-to’s: they had bands of course, but also comedy, film screenings, a food “takedown” series and a fun “state fair” series as well. I’d built up two successful bar trivia nights in Manhattan over the previous few years, and Bell House invited me to do something similar in the Front Lounge – before long, it had been picked up by Time Out New York, and we had a great turnout of 50+ people each month playing bar trivia.

I think I was in the shower when the idea struck me (most of my breakthroughs come while in the shower for some reason). What if we created the biggest trivia night in all of New York City? I was envisioning a “leveling up” of the informal pub quiz nights which had sprung up all over the place with increasing popularity in recent years, including my own: instead of 50 people playing for a bar tab, what if we had 300 people playing in a professional performance venue with full light and A/V capability, awesome questions, mind-blowing prizes, and a bona-fide TV game show celebrity host?

I toweled off, ran straight to my computer and drafted a concept sketch, which I fired off to Pat. I think he got back to me in about 2 minutes, loving the idea – not only did it seem like a great means of engaging directly with his viewers in a cool and unique way, but it sound like it would be an absolute blast!

I then brought the idea to The Bell House, and based on the response TrivWorks had received thus far to our monthly pub quiz night, they graciously said, “let’s give it a shot!” We booked our first event in the main room for June 2011, and decided to make it a trivia fund raiser. We found the perfect partner organization in VH1 Save The Music Foundation, whose mission is promoting music education in public schools, given Pat’s previous connection to VH1 as well as my wife being a music teacher in Brooklyn.

The day we announced this event to the public was one I think back to often, and that’s because the response was so enthusiastic. I was shocked at the number of shares, retweets, and positive comments which sprung up, as well as a ton of favorable press: Pat Kiernan, adored newsman and veteran game show host, is hosting a POP CULTURE TRIVIA NIGHT!

The event sold out immediately, and went even better than I could have possibly hoped for. The room was packed to the rafters, completely raucous, and had the energy of a rock concert – when Pat took the stage, he was welcomed like the star he is.

We booked another event after that, and then another, and another…until here we are, nearly 5 years later, still bringing hundreds of pop culture fans together every few months for uniquely fun, high-energy & laugh-filled nights of trivia. Of course we still do corporate gigs, however these massive happenings in Brooklyn are just an incredibly special thing we have built together – Pat, The Bell House, and me – and I am very, very honored proud to be a part of it!

Our next event is Wednesday, March 2nd – purchase tickets by clicking here!