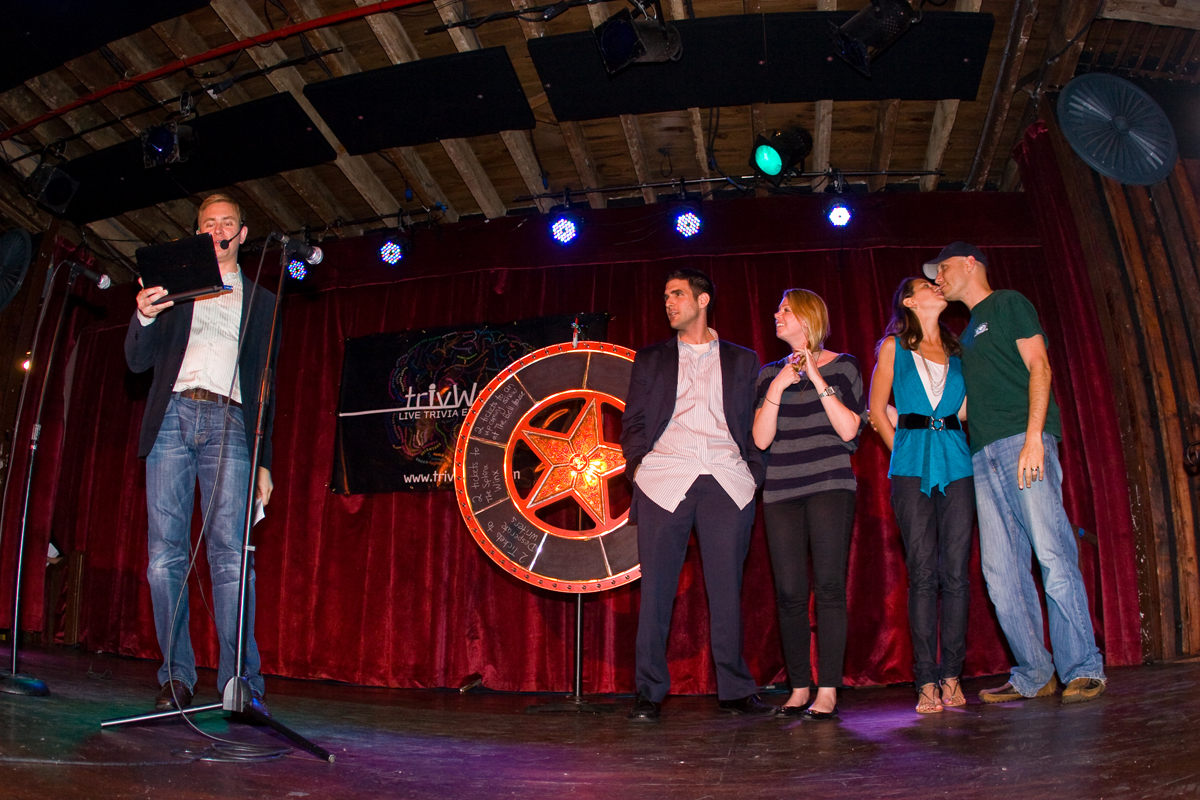 It’s been a little while since my last blog post – August can be tough, as you likely know, in that many people are out of the office on vacation. I am no different: it was great to spend a couple of weeks away, visiting family and friends all over the country. However, given I’m “the boss” of what is still a small business, I can never REALLY go “on vacation…

And so yes, I was on my phone throughout my travels, quick to respond to inquiries and even managing a couple of late-summer events – I even personally emceed my first corporate trivia night in NYC since moving to Los Angeles, CA two years ago, which was a total blast! I was also interviewed (at the airport, no less) by the Associated Press, and had the honor of appearing in a syndicated article on how small businesses avoid and deal with employee turnover. This article was picked up by The New York Times, The Washington Post, Inc. and other top-tier national media, which you can read by clicking here.

I also had some things happen that weren’t so great…

For the first time in nearly ten years of hosting and producing team building game shows for corporate groups, I was completely and royally ripped off. I had agreed to produce an event for a client utilizing a per-person fee rather than a flat fee, which I almost never do (you can read more about here), but rather than pay me the amount due, this client – whom I had never worked with before – decided not to pay for the full number of people who were present. It was very strange, very awkward, totally dishonest, and I felt taken advantage of.

Then I had another client file for bankruptcy the day after our event.

The gig required my corporate game show emcee to fly from New York City to Chicago and stay overnight in a hotel, travel expenses which we had agreed previously would be reimbursed by the client – a standard practice in this industry. Well, guess what? I wound up having to eat that. Clearly the client knew they were in trouble, and could have reimbursed me in time – but no, it was easier (and cheaper) to just do the gig and then say, “Chapter eleven!” Again, something that’s never happened to me before…and I hope doesn’t happen ever again.

The reason I’m bringing up these two examples isn’t to vent (okay, maybe it is a LITTLE bit), but rather to provide a setup for what I think is a larger issue, which is the notion of fairness in the workplace. I’d mentioned up top that I was fortunate to have appeared in an article on retaining talent. Would you like to know my secret? It’s simple: I find the right people, and treat them like gold. I truly value and appreciate them, and let them know this in no uncertain terms. Whether it’s for my trivia emcees, “Special Talent” and celebrity emcees, event producers, grading staff and other independent contractors, I:

While I was in Manhattan earlier this month, I hosted a happy hour for my New York City-based staff – not just as another means of treating them well (which it was), but really to re-connect, and to let them know just how much I appreciate what they do. While there, one of my emcees said something to me which really resonated.

She said, “David, you are by far the most-fair person I’ve ever worked with in the entertainment industry.”

I assure you that felt great to hear, but honestly, it also made me a little bit sad. The reason? Because the way I treat the people I work with is the way I think EVERYONE should treat their employees – however, both you and I know this not to be the case.

The whole reason why I started TrivWorks in the first place back in 2009 was to help companies motivate overworked, stressed-out employees caught up in the financial crisis. The motivation for ME was to create something which I knew worked in a bar setting (I was of New York’s best-known and top-rated bar trivia hosts at the time), and apply it to the workplace. I knew the need for this all too well, since I had also spent about a decade working for other people – never feeling that I was treated fairly, or valued for what I brought to the table.

A good friend of mine is a lieutenant in the NYPD. He is very well-respected, not just within the ranks, but within the community he serves as well. I’m extremely interested in what he does, and asked him once what the secret is to being a police officer – a commanding officer, no less – who is held in high regard among EVERYONE he or she interacts with, co-workers, clients and the public alike.

His response? “Treat people with respect.”

This stuck with me. Just because you’re in a position of power, be it a lieutenant in the police department, the head of a department or the boss of a corporate trivia company, the way to positively influence people and get them to WANT to work with you is to treat them with honesty, courtesy and above all, fairness.

What does it mean to be fair in the workplace? Take a look back up top at how I treat my employees here at TrivWorks. I try my level best to actually LIVE the company mission statement, to practice what I preach and be the change I want to be. Not terribly long ago when I was an employee, I felt I wasn’t treated well. So…I do the opposite:

To me it’s not rocket science, it’s common sense. If I’ve got the right people onboard and they WANT to be there doing the work they’ve been hired to do, then as a business owner it’s absolutely in my best interest to try and keep those people around for as long as possible. I’ve found that the most effective way to do that is to treat them fairly.

It doesn’t stop there, though.

Running a fair workplace means treating not just employees properly, but clients and prospective clients as well. I realized as I did when I started this company that a critical component of success is to establish long-term relationships with customers. To do so, I have to be flexible and adaptable, and accommodate as best I can to each unique situation. I’m not and have never been in to “quick hits” where I do a gig, take a client’s money, and we never speak with one another again – it’s not my style, and not the kind of business I want to have.

Two quick examples here, to help illustrate the role of fairness when dealing with clients:

This past week, I was to have been hosting a trivia game show for a company event in Las Vegas. The gig came together very quickly, and fortunately I was available and blocked the time off. The client signed the agreement and submitted the deposit, and I in turn booked my flights and hotel.

Unfortunately, just a few days before the gig the client called me up to report that due to an unforeseen emergency, they would have to cancel the event entirely – dinner, entertainment and all. This is EXTREMELY rare, but it does happen. For that reason my contract clearly states if the client cancels within a certain time frame, then I keep the deposit – after all, I have already committed the time (two days and one night, in this case), and can’t re-book it. It was a small event though, and for a new client I’d never worked with before, so…free money, right?

That’s not how I operate. Again, I’m interested in establishing long-term relationships, and that means being as fair as possible. So rather than pointing to my contract and walking away, I informed the client that if they are able to re-book within the coming months and I’m available, then I would be happy to apply the retained deposit towards a rescheduled event. That’s what I would want a vendor to do for me; it’s also the right (and fair) thing to do, and I hope I get to Vegas to work with them soon.

On the other hand, look at the example I provided at the start of this post, about the client who screwed me over. In this case, I again had a brand-new client whom I’d never worked with before – however, there was definitely potential to establish a long-term relationship with annual corporate game shows, perhaps even more often.

The client didn’t know exactly how many people would ultimately be in attendance, but had a rough idea. I proposed a flat fee for the maximum number of expected attendees, which to me sounded fair – but she didn’t want that. Eager to get what I hoped would be a long-term business relationship off on the right foot, I agreed to change my fee structure to per-person in order to be accommodating – a concession on my part, seeing how I’d invariably make less this way than by simply charging a flat rate.

Now normally, when dealing with a new client there is a certain level of understanding and trust; they will appreciate my efforts to be accommodating with my fee, and be honest and honorable in return. Not so with this one; she told me she didn’t bother counting the number of people at the event (HER guests, mind you!), and said it was up to ME to “prove” how many people were there. I proposed that we then split the difference, and say that the crowd size had been approximately halfway between the minimum and maximum expected attendance (which it certainly was). Had she been honest and interested in a long-term relationship like me, she’d have said “Sure!”

There’s not a doubt in my mind she knows how many people were there; she just saw an opening to save some money by cheating the vendor. Ultimately, my getting cheated is my fault for not making it exceptionally clear upfront whose responsibility it was to count the number of attendees; however, it wasn’t unreasonable for me to assume the host of the party knew how many guests she had, and would do the right thing by telling me.

You can see how fairness cuts both ways, and it takes two trusting parties to really make it work. I don’t have rose-colored glasses on. I realize that this is the real world; sometimes in business, I’m simply not going to have that level of mutual trust and respect I seek – either with my employees, or my clients as the above example shows. But I will ALWAYS enter into every business relationship with the long-term in mind: long-term emcees, long-term clients, long-term everything.