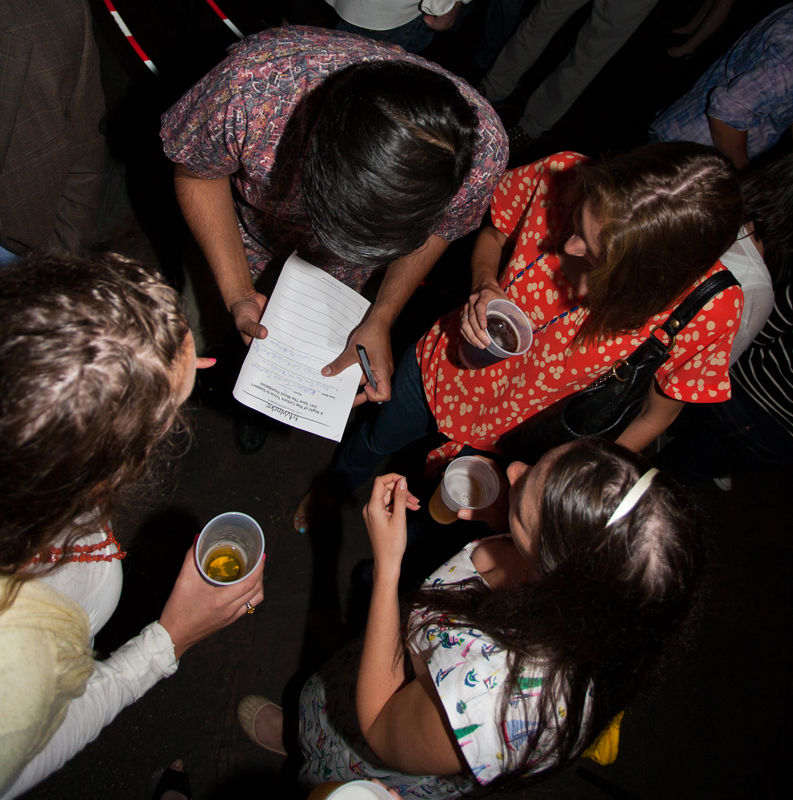 Last month, we produced the second of three scheduled summer office parties hosted by NY1 anchor/professional game show host Pat Kiernan. I’ve had the privilege of collaborating with Pat for over five years now, and together we’ve created some truly remarkable special events, for both public and private audiences. During that time, I’ve gotten to know his style and preferences well, and can craft quiz questions which are a good fit for his personality; for his part, he’s become exceedingly adept at the live trivia event format I’ve been using for the past ten years. We’re a good team, and I’m incredibly honored to be working with him.

I wasn’t present for our most recent event together, as I am currently in Long Beach, CA establishing TrivWorks’ presence on the West Coast by operating our team building activities in Southern California. I will refrain from identifying the client here, in deference to their privacy – however, I will say that this was a relatively large group, about 150 people, very mixed with respect to age, managerial level and length of employment with the firm, and exceedingly smart.

What do I mean by this? I think you probably have an idea. Just imagine a group of rollicking, back-slapping salespeople, and then…imagine the opposite. This was an audience made up almost entirely of geeks, for lack of a better term (which I use endearingly, not disparagingly, as everyone there would gleefully describe himself or herself as such). Engineers, research scientists, IT folks, and the like are not historically known as hard-charging partiers. I was told in advance during our plenary sessions that this group was reclusive by nature, and didn’t readily socialize. The entire point of the event, in fact, was to get them interacting and engaging with one another in a fun way.

But how do you do that?

I actually get asked this a lot by prospective clients, so it’s something I’ve had a lot of unique experience with as a team building professional. I can understand from the planner’s point of view what a challenge having such a group presents, and the difficulties and stresses which come with planning an event for them. Fortunately, I can report that you can indeed hold successful group bonding exercises for audiences such as this, where even the most shy nerds will come out of their shells. You just need to ensure that a few things are in place.

This is critical. I’ve written endlessly here on my blog about this, but that’s because it’s dead-on accurate. For ANY event with ANY group, you must be sure that what you’re doing is the right fit for the crowd. This is never more true than with a group of which may be timid, averse to mingling, or just plain socially awkward. There may be temptation on the part of the organizer to do something wild and crazy, to just throw them in there and hope for the best: team sailing, laser tag, or other big, physical thing which requires a lot of communication and teamwork. In my experience dealing with companies who have tried this, the results are never good. People don’t get involved, they don’t have fun, and in fact they may even resent it.

Instead, you must identify something which meets these types of people where they are. Let them use those big brains of theirs, but don’t force them into doing something that’s TOO social, requires TOO much of an outgoing nature. For the event we had last month, Pat told me afterwards that trivia was perfect for the attendees: challenging, laugh-filled, but no one is put on the spot or made to feel uncomfortable in any way. But other things might work well here, too – I’m thinking cooking would be a good, safe option, as would perhaps an “escape the room” experience which emphasizes acumen and problem solving over physical challenges.

I heard a joke once somewhere: How do you spot an outgoing introvert? They look at YOUR shoes while talking to you. Keep the participants in mind when selecting the format. Should there be a free-form socialization period beforehand? Maybe, but these folks might not be into that – they’ll just saunter to the side of the room, waiting for the program to start. Consider moving the social period to afterwards, when the ice has been broken. Also, how should the room be set up? How many tables should there be, and how many chairs per table? You’re seeking to maximize interactivity, so be mindful of how this physical arrangement impacts the overall experience.

Everybody loves to laugh. There’s just this incredible disarming power to laughter, which releases tension and social anxiety in a way I believe few other things can. Odds are those partaking in this happening are already nervous just by being there, and knowing they’ll have to do “something.” If you integrate some belly laughs, however, it’ll alleviate that in no time. Pat confirmed this much when he told me everybody was laughing right from the start – something which delightfully surprised the organizers, who were understandable concerned about the group “getting into” the action.

Hey – this never hurts. Unless your company has lots of underage interns, is culturally averse to alcohol or other specific reason, I can’t think of how adding some social lubricant won’t help people relax and let their guards down. The result will be easier socializing, more laughter, and just a greater time in general.

There’s really no one-size-fits-all solution here, and every case is different. However, just know that the task is NOT impossible. You can indeed create an incredibly enjoyable, memorable and impactful time for introverted groups, where they learn about each other, and even themselves. The long-term results are really exciting: better trust and communication back at the office, more efficient teamwork and, ultimately, happier clients and a boosted bottom line.

For another article on team building ideas for introverted groups, click here.