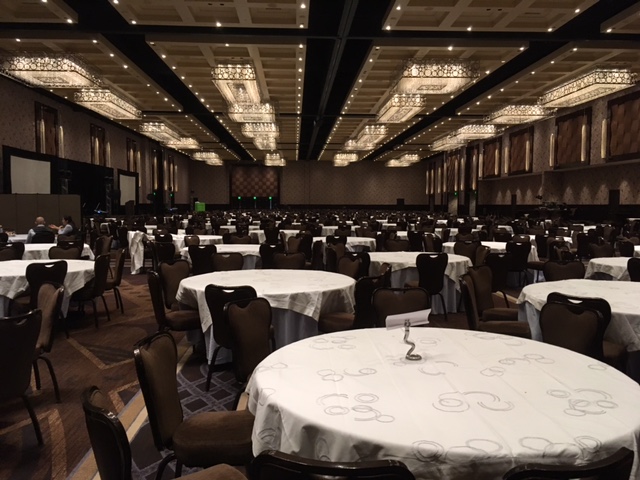 Last week, TrivWorks had the honor of participating in a large conference in Las Vegas, to provide entertainment to a mammoth audience of 1,400 attendees. We are no strangers to large events, having produced the largest trivia nights in New York City several times a year since 2011 (learn more here). However, I was there myself in Vegas, and let me tell you: a 1,400-person audience is big.

When providing corporate trivia entertainment for a large audience such as this, the standard team trivia format we typically employ simply isn’t going to work. At The Bell House in Brooklyn, where we’ve produced the aforementioned large-scale events for the past six or so years, we’ve comfortably capped attendance at 300. This is to serve several purposes. For one, we have to ensure that the experience is enjoyable for all attendees, and cramming as many people as we can into the space won’t serve that goal. But from a more practical standpoint, we have to ensure that our grading system is effective and efficient.

One of the nice things about our events is that we can manage large crowds for a simple reason: when playing team trivia, it’s not the number of attendees that matters with grading, so much as the number of teams. When you hear “300 people” playing at once, you might think, “holy cow!” But in reality, those 300 people are playing in teams of 4-8 people, which usually works out to somewhere around 70-90 teams – which is absolutely manageable, provided you’ve got a dedicated squad of trained graders and device with Microsoft Excel on-hand.

However, let’s get back to this event in Las Vegas. We’re not talking 300 people, we’re talking literally five times that many! What did we do?

Tonight’s trivia event @Cosmopolitan_LV will be for 1,400 people. This room is BIG! pic.twitter.com/ze1HM9YpkT

Well, as mentioned our proven formula for corporate trivia parties wasn’t going to work here. We wanted to keep this conference entertainment “old school” (ie: no digital answer submission devices); to help foster collaboration and team bonding, we wanted folks to set aside their mobiles, and play trivia the old-fashioned way. Even with all of our experience and expertise brought to bear, there really is no feasible way to efficiently collect, grade and tabulate multiple rounds of answer sheets from nearly 200 tables/teams. Even if we could, how many teams would be tied for first place every round, as well as at the very end? I shudder to think…

Working closely with the client, we settled on a new format. First of all, the client was keen to use this experience as a means of “mixing people up.” The event had drawn the company’s professionals from all over the world into one room for a very brief period of time, and the client was determined to make the most of this very special situation (an approach which I couldn’t have agreed with more!). As such, the tables were all numbered, and guests were assigned to tables not based on their existing work groups or countries of origin, but rather, randomly. This would help foster socialization and new relationships – which is what the stated purpose of the event is, and in fact why TrivWorks exists to begin with. I loved it!

We determined that we would kick the event off with just one round of full-room team trivia. All 200 or so tables would be pre-set with one branded answer sheet and pen; once the doors opened, the attendees would locate their tables and sit down for a combination dinner/trivia night. We would announce the trivia questions, then collect and grade this one answer sheet with a dedicated grading squad, strategically placed throughout the massive ballroom. We would then have the entire dinner to grade this one round of trivia, which through my experience at The Bell House and other large events I knew would be perfectly manageable. We would round the event out with a series of onstage head-to-head trivia bouts, as well as a game show-style “showdown”  grand finale to determine the overall winner.

With a plan firmly in place for how to execute a customized team trivia night for a large corporate audience, all that remained was having the right emcee. At TrivWorks, we only work with trained hosting professionals who have tremendous experience onstage in front of diverse audiences, be they employees, executives or clients. However, an event like this calls for something more: we needed a seasoned corporate event emcee, with decades of experience working in front of “large rooms” like this one.

Jeff Rogers was just the man for the job. A professional emcee, moderator, and game show host with over 25 years of experience in front of corporate audiences, Jeff has worked with some of the most prestigious brands in the world. On any given night, he may be found anywhere in the United States interviewing senior executives onstage or as part of an internal broadcast, or keeping an audience of 10,000 general session attendees engaged and fired up in between keynote speakers. He’s also a professional game show host, which means he knows exactly what he’s doing when it comes to facilitating trivia contests. He’s perfect! (to learn more about Jeff, click here).

The event couldn’t have gone smoother. The audience entered the ballroom and was seated, after which Jeff hit the stage, ordered everybody to put their cell phones in the middle of their tables, then walked the audience through a fun, laugh-filled orientation. When it was time to announce the trivia questions, they appeared one at a time on the mammoth projector screens located throughout the room, which combined with Jeff’s booming voice meant all 1,500 attendees could see and hear the questions. Once the last question was announced, our grading team – strategically positioned across the room in between the tables – swiftly collected all 200 answer sheets, then took them to an adjoining room for grading and tabulation.

The grading went even more swiftly than I had imagined – I’d say we were completely done after no more than ten minutes. We took all of the teams which had scored a perfect ten out of ten, and put their answer sheets into a raffle bowl. While this was happening, Jeff was hosting a head-to-head trivia bout onstage between two groups of senior executives, in between dinner courses. As a means of culminating the event, we brought the raffle bowl of perfect scores onstage, and Jeff drew two teams to compete in a final “showdown” challenge onstage, to determine the overall winner.

I’ve been hosting and producing trivia events for over ten years, and I have to say that this event went as smoothly and successfully as any I’ve ever been a part of. The customized questions and friendly competition were extremely well-received by the audience, and the answer sheet collection and grading was perfectly seamless. However, having a highly experienced professional emcee onstage running the show really tied everything together beautifully, ensuring that the audience had a fun and festive experience which felt professional from beginning to end. It was a huge success for the client, and a big win for TrivWorks – I’m looking forward to working with Jeff to produce more mega-sized events in the future!