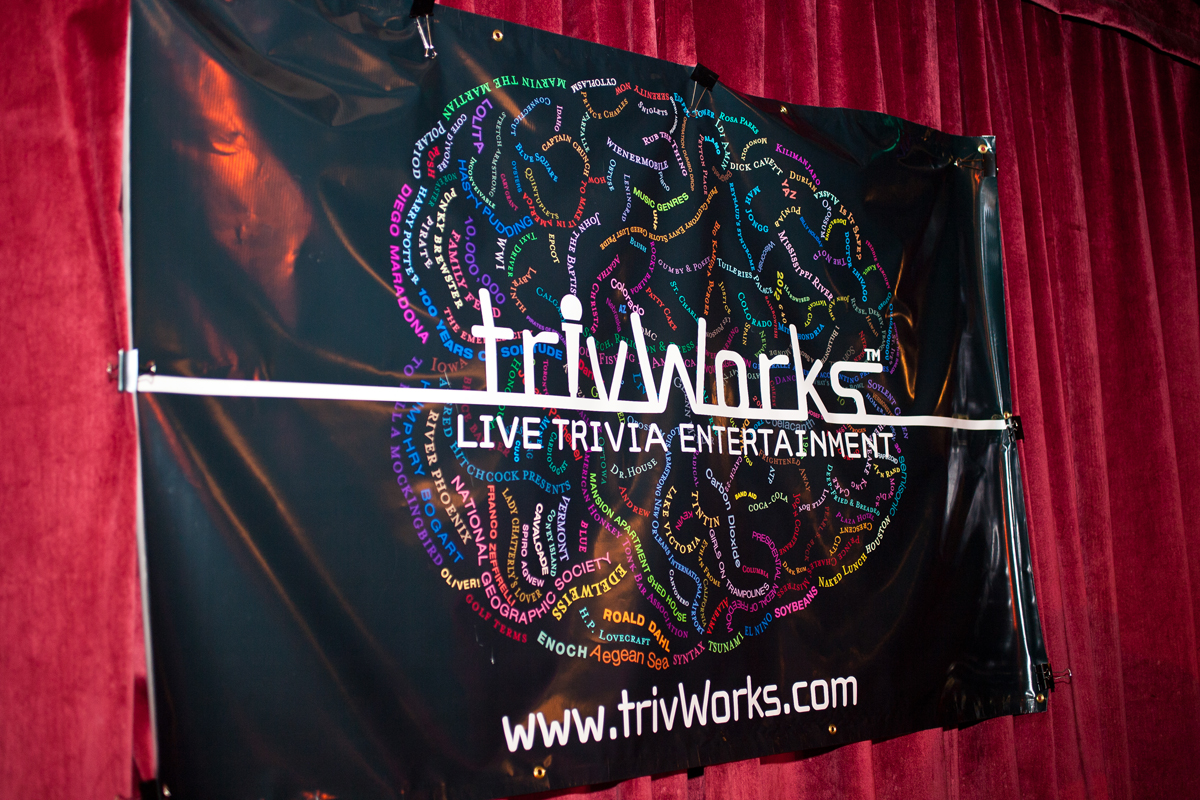 As I wrote about in another recent blog post, my path to finding a job I truly enjoy and excel at was anything but straight. I didn’t just land where I am today, producing team building and corporate entertainment trivia events. It was a long, arduous process, involving about a decade of miserable employment, and a fair share of unemployment as well.

God bless my wife, whom I just celebrated my seventh year of marriage to. She’s got this saying that I think about often, and which inspired this post, actually. She says that whenever you have a bad experience, try to “find the pearl.” What she means is, look for that one truly valuable thing you can extract from what you’ve been through; you might otherwise overlook it completely, but if you are willing to swallow your pride and make the most of a negative situation, you can find something which will actually help you in most cases.

Isn’t that nice? See why I married her?

TrivWorks is not only the longest job I’ve ever had (follow this link for more on that), but it’s the only job I’ve had which I truly enjoy. Don’t get me wrong, it’s still work; there are parts of this gig I really DON’T enjoy, and truth be told I have my fleeting moments where I think about packing it all in and opening a tapas bar or something. But the good VASTLY outweighs the bad. Even during those brief times when I’m not happy with work, I still look for – and almost always find – the pearl.

With that, here’s a look back at every “bad” job I’ve had since graduating college: where I was, what I was doing, why it sucked and…the pearl I kept with me.

My fist job after graduation was horrible. Not having a plan or direction of any kind, I had heeded the advice of my college’s career guidance center and found something I “didn’t mind doing for a year,” just to have some experience and stability on my resume.

The gig I found was an entry-level data entry job at a pharmaceutical company.

Did I need a college degree to do it? Absolutely not. Did the job involve speaking with other human beings? Practically never. For eight hours a day, I sat in my cubicle, Dilbert-style, wearing a tie and a miserable look upon my face as I entered numbers into Excel spreadsheets. Now, I’m not an analytical guy; I’m a creative guy, as you could probably tell from the fact that I eventually founded a NYC corporate entertainment and team building brand specializing in company trivia events. Was this the environment for me?

But in the year I worked there, I DID gain some valuable lessons. I learned how to use Excel, for one; I also learned about operating in a professional work environment: how to send meeting requests, use shared drives, craft Emails and more. At the time, I was the most miserable I had ever been in my entire life; looking back, I can see that this experience served as an important foundation for obtaining the most basic nuts & bolts of office work, which I would eventually come to rely on daily as I started and ran my own business.

Exactly one year into my first job, I jumped ship when a remarkable opportunity presented itself: I joined a presidential campaign as a member of the advance team (it’s a crazy story, which you can read about by clicking here).

I won’t get into the details of how I got there, but I abruptly found myself traveling all around the country, living out of a suitcase and motel rooms as I prepared the groundwork for large-scale campaign events. It was exciting work I’d never done before, and had no idea what I was doing, but I jumped in with both feet; scoping out prospective event sites, coordinating volunteers, working with the national press corps and the United States Secret Service, riding in motorcades and so much more.

Thrilling as it was, I was A) the low man on the totem pole, B) nowhere near as experienced as everybody else I was working with, and C) not particularly political. I was doing it not because I was passionate about the election or the party, but because my previous job sucked, and this was a once-in-a-lifetime opportunity. I often found myself marginalized to the most rote, non-glamorous roles: hanging up signage, taping down cables, driving vans. I felt incredibly out of place, often isolated not just in some random part of the country, but within my own team as well.

And yet, looking back I can see now that this experience was in fact my first foray into what would eventually become my career: producing entertainment events for corporate groups. I got the basics under my belt, from conception to execution. I also learned the lingo, understood the various aspects of putting on massive events, and had my first exposure to working directly with VIPs, talent and celebrities.

The Pearl: Learned the rudiments of planning & running events.

When the presidential campaign ended, I soon found myself unemployed. About eight months of temp work followed, which I won’t bore you with here; but I applied and got into graduate school, which began in the fall. I had the summer to kill, so I decided to join some friends as a summer camp counselor.

It was a really bad experience.

This was a religious Jewish camp, and while I am Jewish – proudly and happily so – I’m not particularly observant. Everything was in Hebrew: the signage, the daily schedule, even the announcements. I don’t speak Hebrew, so I was at a total loss, frustrated and confused every day for nine weeks. I didn’t have a good time, but I DID have my room & board paid for, and got a paycheck – small, but a paycheck none the less. I also learned what I DIDN’T like, which is also important. I would learn to avoid situations like this in the future.

My graduate school program at New York University was a specialized two-year masters degree in music & entertainment business. I had an industry internship requirement, so I thought I’d try my hand at concert production, since I enjoyed live event work. It was grueling; I was essentially a roadie, but at the same venue: Manhattan’s South Street Seaport, as part of the River to River Summer Concert Series. For two months in the broiling, humid summer heat, I spent twelve hours a day outside, setting up stage equipment: speakers, instruments, microphones, you name it.

It was hard work physically and mentally, and was incredibly draining. But I learned a TON about event production, and had additional experience working with talent.

I had another six-month internship during grad school within the PR department of Jazz at Lincoln Center, where I learned the basics of media relations. When I graduated and couldn’t find a job in the entertainment industry, I took the only job I could get: an Assistant Account Executive position at a small PR firm, specializing in pharmaceutical & healthcare business. After a year at this company, I transitioned over to a global PR firm, doing essentially the same thing for another year.

These jobs – well, there’s no other way to put it, I HATED them. The environment at these PR firms is intense: high-strung, deadline-based, and full of type-A folks who don’t mesh well with my laid back, creative-type demeanor. As an entry-level guy, I once again found myself doing the least-desirable roles: monitoring the news three times a day for client media mentions, writing press releases and other media materials, pitching reporters.

I’ll be the first to admit it, I am NOT a naturally organized or detail-oriented person (which my wife can attest to). But those two years I spent in the PR sweatshops, they all but forced me to up my game in both areas. I learned how to set deadlines, organize my Emails and documents, how to PROOFREAD my stuff, and how to utilize my time in the most efficient way possible.

I also learned about client service: how to respond to requests, run phone meetings, send recap Emails, deal with crises and more. There is no way I’d ever go back to PR for any amount of money – but I DID learn so much, which I absolutely use every single day as a corporate event entertainer and trivia team building producer.

From PR I moved on to spend six years working at Manhattan’s 92nd Street Y, a big-time cultural and community center. Now, this wasn’t a “bad” job per say; in fact, I quite enjoyed the good parts of the gig; a prestigious institution, they really let me run free with my creative and interpersonal side. I got to conceive and curate literally hundreds of new lectures, outings and other programs for adults of all ages, and the work made me feel great.

However, like any job there were the downsides, too. The pay was pathetic, so much so that I needed not one but two side gigs just to make ends meet (pub quiz host and corporate scavenger hunt producer/guide, respectively). There were no opportunities for advancement or development, meaning I was essentially stuck in my position, with no room for growth. The office politics were also challenging; even high-performing people like me didn’t get recognized or rewarded, and there was undeniably an attitude about the place that if you didn’t like your job, you could leave any time, because there was a line of people waiting to take your place.

But I probably learned more at 92Y than I did anywhere else. I got world-class training on how to plan, promote and run events. I received a master class on interacting with celebrities and talent, became proficient in supervision and working in teams, and learned how to multitask as I juggled sometimes ten different programs in a single day.

Additionally, for the final three years there, my direct supervisor was Henry Timms. Henry has since gone on to become the Executive Director, and also achieved global notoriety as the founder of Giving Tuesday. You can bet I learned a lot working under a guy like that – mostly about management, leadership, and “big picture” strategic thinking. I really grew into the job as a whole, with a ton of help from Henry.

All of these “pearls” have helped me to reach the place I have arrived at today: starting my own business, and growing it to the point where it is truly the industry leader in trivia team building event entertainment. I think about these “pearls” often, and know that even though I had to go through a lot of challenges and difficult patches – sometimes years long – in the end it was worth it. Everything happens for a reason, and without having been through what I’ve been through, I never would have gotten to where I am.

For another article on corporate team building, visit www.forbes.com/sites/kevinkruse/2018/02/12/a-four-star-generals-approach-to-team-building/#3ebf95d91ce1