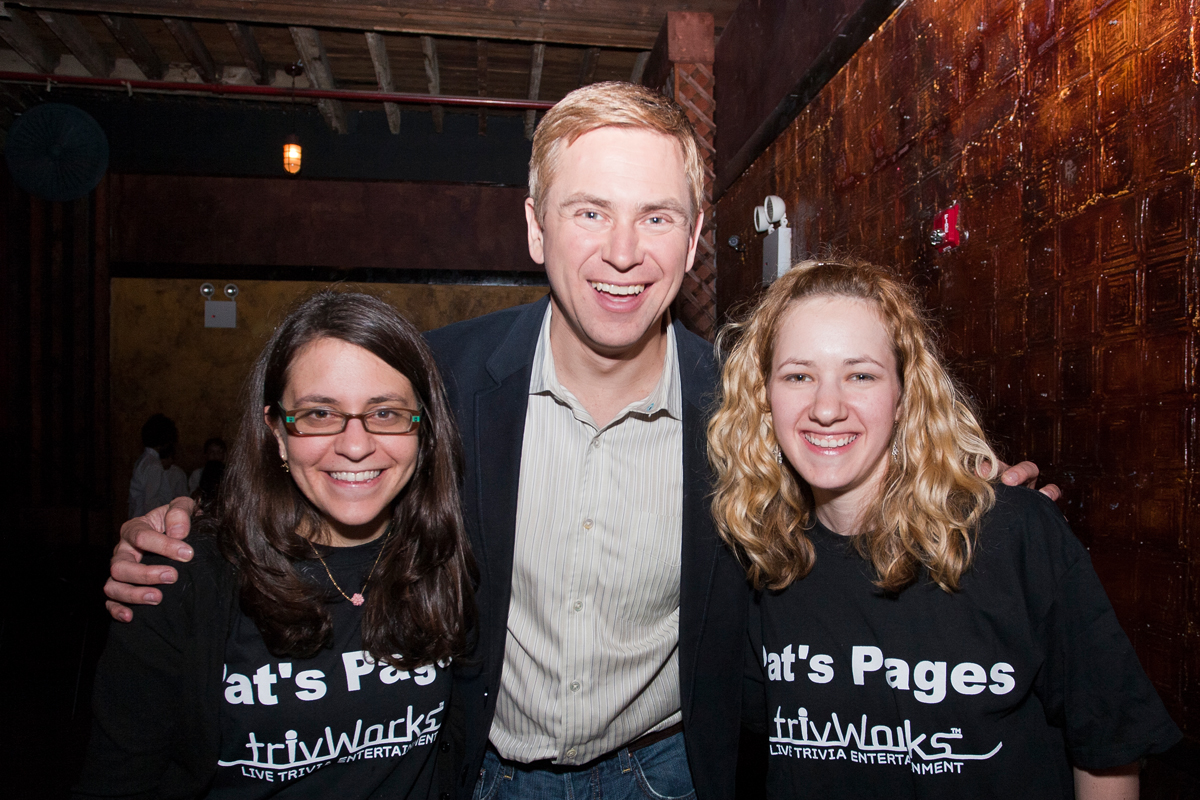 You’ve decided to proceed with TrivWorks as your corporate team building or company party entertainment vendor – great! Your guests are going to have an absolute blast engaging in a raucous, good-natured team trivia competition, complete with professionally-written questions which have been hand selected/custom written for your specific group & goals.

Among the many questions which often arise after the event has been booked: what staff will be working the event? How many people will be sent, and what will their roles be? Today, I’d like to answer these questions in-depth, and provide a detailed overview of exactly who will be at your gig – and what they’ll be doing. Read on!

First and foremost, you shall be having a professional game show host for corporate events at your function. Unlike other vendors who provide actors, amateur comedians or pub quiz hosts, TrivWorks only works with seasoned, highly trained professional emcees.

The emcee’s role is critical to ensuring a successful event. He or she will be responsible for:

As the “face” of the event, the emcee shall be the person on the microphone, and the direct point of interaction between the audience and the vendor. The emcee has years of specialized experience specifically in front of corporate audiences, and may be trusted implicitly to deliver a highly professional entertainment experience for ANY audience, be they employees, executives, clients, prospects, or brand enthusiasts.

In addition to deep corporate experience, the emcees I work with also have strong backgrounds in comedy, specifically improv comedy. Why? Because trained improvisers know how to respond to audiences in real-time, and can spontaneously react to whatever is happening in the room to ensure that the laughs keep coming, while the train keeps rolling (for further explanation of the types of emcees I hire and why improvisers work so well as trivia game show hosts for live events, follow this link).

For smaller gigs – say, 20 or fewer participants – I will likely send just one emcee to staff the entire event. There are times when it may be necessary for me to send two or more emcees, such as when instead of a traditional team trivia competition we have a head-to-head “station” concurrently with “roving” trivia for more informal, casual event entertainment. However, regardless of your event type, size or location, at the bare minimum I will be sending one emcee to run the show, the keep your crowd laughing and engaged with interactive trivia entertainment.

In addition to the corporate emcees I work with, I also have the honor of working with a number of whom I call “Special Talent” emcees. These are individuals who bring some sort of additional element to the mix, to create an even more fun and memorable experience for the audience. I work with a number of celebrities/media personalities, professional comedians, an award-winning illusionist, a trivia “guru” with a photographic memory, and a troupe of master improvisers/singers, all of whom can add that extra “something” to really make a lasting impact.

These “Special Talent” emcees are all pros in every sense of the word. They are also incredibly easy to work with, and put on a fantastic show each and every time. When you bring on a “Special Talent” emcee, he or she will never come alone; there will always be at least one additional staff member there, a producer – even for smaller events (more on that role in the next section below).

For most events, I will be sending at least two staff members: an emcee, and a producer. Who is the producer? He or she is responsible for all of the “offstage” elements which go into preparing for – and running – the competition.

Oftentimes, the producer is the one handling all of the hands-on prep work which goes into putting these gigs together, such as printing out answer packets and answer keys, and securing pens, small prizes and other materials/supplies needed (click here to learn more about all the work that goes into producing these events). The producer will arrive early to the venue for setup, which typically includes:

Once the event is underway, the producer is then responsible for:

The producer’s role is vital to ensuring a smooth, efficient event flow from start to finish. Particularly for larger or more complicated events, it’s really important to have somebody “on the ground” to ensure all of the offstage elements are moving according to plan, and to let the emcee onstage do his or her thing without having to worry about any of the production stuff.

We run our events “old school,” meaning teams write their answers down using pen and paper. Why? Because even though digital polling technology exists and is pretty slick, it’s NOT foolproof, and snags can happen – and believe me, when they do happen in a corporate trivia night, it’s BAD. But also, there is really no way to submit free-response answers using tech – it’s all multiple choice. It’s just so much more rewarding for teams to come up with and submit an answer that’s correct, versus simply selecting from options A through D.

And so yes, graders – TrivWorks provides them as well!

The number of graders I send is dependent upon the number of people participating. There’s no hard and fast rule for this, however as a general guideline I usually like to have one grader for every 50 people. There are times when we don’t really need a grader, so the producer can step into that role as well. However, for larger events it really is vital to have those extra hands available, to pitch in and make sure the event runs smoothly – I’ve had as many as ten graders working at a time.

The grader’s job is really more than the title implies. He or she is responsible for:

Because they will be interacting directly with the audience, I like to hire graders who are performers in their own right, and who can serve as an “extension” of the emcee in this sense. In addition to serving a critical role in the flow of the gig, the graders are charming, funny, and there to have a great time with the participants.

For clients who wish to have great music throughout the event, I work with a fantastic disc jockey named DJ BayBFace who can spin tunes from beginning to end. He really excels at selecting fantastic music to play during guest arrival/cocktail hour, as well as during meal service. At the event itself, he will be onstage working directly with the emcee, to provide great filler music; he will usually run a “name that tune” round as well.

There is one final person who may attend your event, and that’s you’re truly! In addition to stepping into all of the above roles (with the exception of “Special Host” and DJ), there may be times when I am also in attendance with no “official” role or function. There’s an emcee onstage, a producer on the ground, graders doing their thing, the DJ spinning…and me, overseeing it all.

I suppose you could call this role “Executive Producer.”

When I’m onsite in this capacity, I actually like to hang back and not get in anybody’s way/tell them how to do their jobs. Unless something goes spectacularly wrong, I won’t be onstage at all, I won’t be producing, won’t be grading. I’m simply there to observe, to take notes, and to let the client know by my presence how important their event is to TrivWorks. This doesn’t happen all that often, especially with me now being in Southern California while the bulk of my emcee and production staff is based back in New York City. However when it does happen, it allows me to get some face time with everybody, maybe offer some critiques here and there, and to reassure clients that the event will run perfectly (which it will, regardless of my presence).

That’s about it! All told, you can expect me to send anywhere between one to ten staff members to your event – though in all likeliness, the number will probably be two to four. I shall provide you with their names in advance if your office/venue requires for security reasons, and they know exactly what to do upon arrival in each of their respective roles.

For another useful article on corporate party planning, check out https://www.inc.com/geoffrey-james/how-to-throw-a-major-corporate-event.html