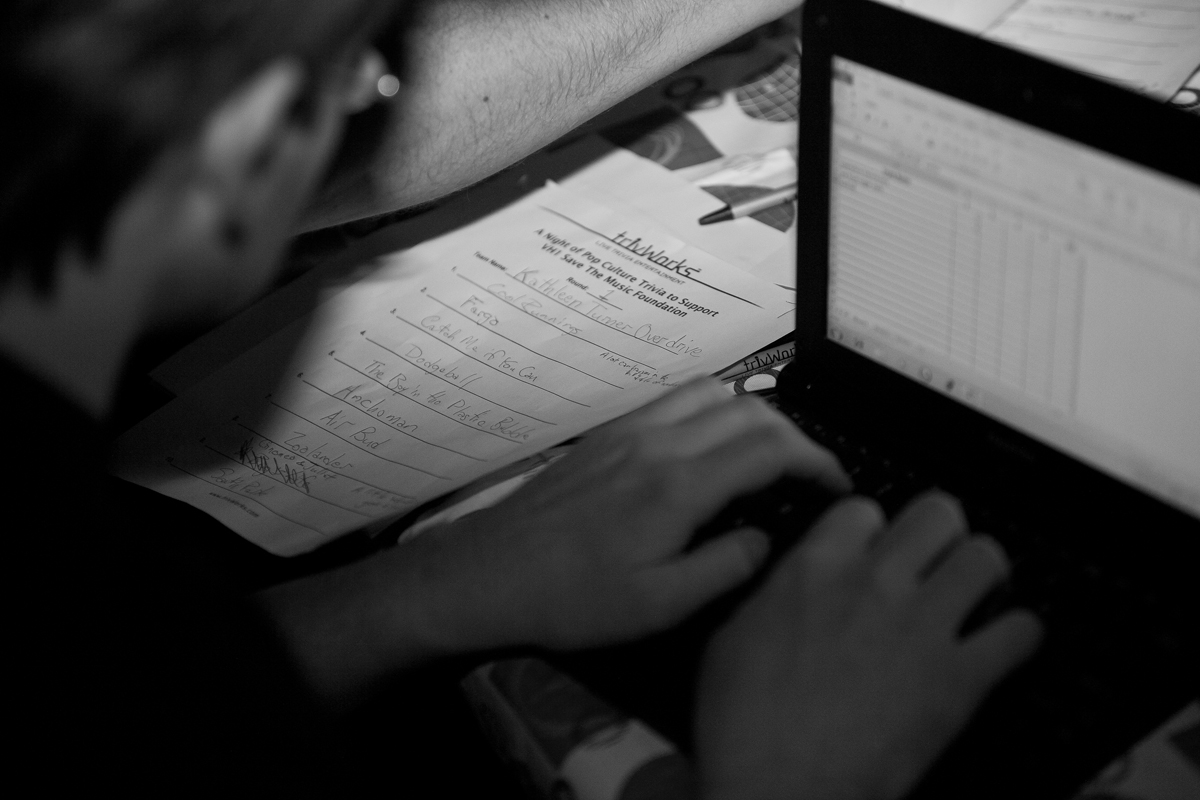 Let me tell you a story.

At the beginning of the summer, I reached out to a company that works with corporate event entertainment vendors in San Francisco, California. My cousin works at a tech firm in the Bay Area, and her company recently had a team building game show for the office which they’d found using this service – she recommended that I reach out to them.

I sent an introductory Email, providing a brief overview of my services as the industry leader in this particular area, and asking about a potential partnership.

I received no reply.

I followed up again a day later; still no response.

The following day, I called the number on their Website and spoke with someone, who sounded very excited about my services, and said that the person in charge of new vendor relations would contact me shortly.

A week later, I had received no response.

I reached out again the following week, and did receive a call back from somebody who spent about 15-20 minutes asking me all about my service offerings. She then told me she would send over a detailed questionnaire for me to complete, in order to bring me aboard as a partner vendor.

By the following week, I had received…nothing.

I sent several more follow-up Emails over the next two weeks, and was about to call it quits when they finally did send me a questionnaire. It was a MONSTER; I filled it out to the best of my ability, which took almost an hour, and also sent along some hi-res images.

I followed up one, two, three times over the following week, finally receiving a one-line Email that they would review my questionnaire, then get back to me “this weekend” with a contract.

That was back in July. It was also the last I heard from them.

I’ve sent multiple follow-up Emails and left several voicemails in the interim, but never received a response – nor do I expect to at this point. It appears I’ve wasted an awful lot of my time, in what ultimately turned out to be an effort in futility.

I wish I could say that this was an isolated incident, however I’m afraid that things like this have been happening with more and more frequency in recent years. People are becoming ever-more disrespectful of other peoples’ time, and are lacking in basic courtesies once commonplace in business.

Last week, I wrote an article about fairness – specifically, about how being fair is the key to my success in maintaining long-term business relationships, be it with clients, corporate game show hosts, venues, or other key stakeholders. I wanted to build on this with a follow-up article, one which I’ve been meaning to write for quite some time.

Basically: is common courtesy in the workplace – and business in general – on the decline?

Back in 2013, I wrote another article entitled “Is Client Service a Lost Art?” The impetus for this post stemmed from what I observed at the time to be a decline in the basics of customer service across the board. However, in the five years since writing that post I now feel that the situation may have indeed grown even more tenuous.

Just in the past year alone, I’ve observed the following:

These are just a few of the examples which come to mind, I’m sure I’ll think of more later – however, does any of this seem somewhat familiar to you? I have a sense that I’m not the only one who is feeling a steady decline in the most fundamental tenants of politeness, courtesy and respect in the marketplace.

Rather than stew in frustration or gripe about it on my blog, I thought it might be more useful to you – as well as to me – to take a little refresher on what it means to exercise common (or formerly common, at least) courtesies in the workplace. Below are things which I try my best to practice on a daily basis, even if it means more effort and energy on my part to do so.

Whether you’re a vendor, client or prospect, the decent thing to do when somebody reaches out to you is to respond. Do it promptly if you can (I like to respond to new business inquiries instantly, if possible – otherwise, anyone who Emails or calls me gets a reply as soon as I am able). Why is this important? Because nothing says “I care” and “I think you are important” like a fast reply: it means that whatever you are seeking, asking, or concerned about is important enough to merit immediate attention, which is a basic tenant of providing excellent service.

Set a Proper Out of Office Alert

This is one of those simple things you can do to make life easier for those you work with, yet which I think far fewer people are doing these days. How many times in recent years have you sent an Email to a colleague, client, vendor or anyone else, and received no response – only to find out later that the recipient was out of the office for an extended period of time? It’s frustrating – especially if your matter is urgent or timely.

If you are planning to be out on vacation, travel, maternity, paternity or what have you, take a moment to set the out of office. At the very least, it will let people who Email you know WHY you won’t be responding any time soon, and lets them know to look elsewhere for answers – or at least wait until you return. Also, a proper out of office message doesn’t simply say, “I’m out until X date, I’ll get back to you then.” Provide instruction on who else can be contacted in your absence – or, for urgent matters, provide your cell phone or other means you can be reached. This way your colleagues, clients or other important folks won’t feel left in the lurch to fend for themselves.

Studies show that people are using voicemails less and less, particularly among millennials. The ease of Email and text messaging makes the process of leaving and listening to voicemails seem cumbersome by comparison, even if we’re only talking about a few extra seconds of inconvenience (follow this link for another article on how increased digital communication might be eroding your competitive edge). Regardless, you can’t forget about voicemail; it’s still a vital communication tool, and one which should be properly and respectfully utilized in a business setting.

First off, record a welcome message. I’m finding more and more that when I call a number and am sent to voicemail, rather than hearing a personalized greeting, I’m hit with a computerized voice telling me, “The person at number XXX-XXXX is not available,” or “The person you are trying to reach has a voicemail box which has not been activated – please try again later.” I don’t care who you are: if somebody’s trying to reach you and THIS is what they hear, it’s offensive, and reeks of unprofessionalism. Do yourself a favor: activate your voicemail, and record a greeting.

Once your voicemail is activated, LISTEN TO IT. “I never check my voicemail” is no excuse for missing a message, or not receiving vital information.

And for Pete’s sake, please make sure that your voicemail box isn’t FULL. I can’t tell you how many times I’ve tried leaving a message, and encountered this. In addition to being an annoyance to the caller, it sends a message that you are disorganized/don’t pay attention to important details. Not something you want to be broadcasting to somebody who’s trying to reach you.

I mentioned above at how due to the ease of text messaging, people are gravitating away from traditional phones use. There was a time before the ubiquity of cell phones when we had no caller ID; when the phone rang, we answered it. No more. Now, call screening is the norm. Especially when so many of the calls we receive these days are spam, robocalls or similar, people are less and less inclined to answer the phone if it’s an unknown number.

My advice, if you want to be more courteous in the workplace: answer the phone.

I’m not saying EVERY time, mind you. As a business owner, I get my share of daily spam calls as well, believe me. When the caller ID pops up from some random place I’ve got absolutely zero connection to and am not expecting a ring from, I’m going to send that call to voicemail (although for me there’s always a hint of uncertainty, seeing how I produce my team building trivia game shows for company parties and events nationwide, and it could be a legitimate inquiry).

No, what I mean is, don’t send people to voicemail just as a matter of habit. It’s not like the caller doesn’t KNOW you’re doing it, after all; when it rings one time and voicemail suddenly picks up, people know they’ve been declined.

And it stings – each and every time.

Therefore, you can up your courtesy game simply by answering the phone when it rings, especially if you know who the caller is. At the very least, you’ll stand out from the crowd these day.

I wrote above about being responsive with Email, and used an example about what a “bad” Email looks like. When you receive an Email which is curt, doesn’t include a salutation or signature, uses shortcuts such as “U” for “you,” emojis, etc. it sends the message to the recipient that you really don’t care all that much about being proper or polite. There are of course exceptions, such as when you are writing in a hurry, or sending something urgent/timely – however, for the vast majority of your Emails you should try and take the time to put a bit more effort into it.

Start with a “Dear,” “Greetings” or even just “Hi.” Be warm and positive, and remember that some things don’t always translate well in Email, like sarcasm or humor. Close with a few nice words, and be sure you have an auto-signature set up with your contact information. All of this combined shows the recipient that you respect them, and have committed an appropriate amount of time and effort to crafting your message – not just firing something off. This is particularly important when Emailing people whom you don’t see often in the workplace, such as remote team members.

It’s the small things that count, and which really make a difference. People remember when you treat them well, when show them small courtesies, and when you deal with them respectfully. One way to do this is to not be careless or sloppy; call when you say you will, show up to meetings on time, deliver your work on deadline. It communicates professionalism, but also respect for whomever you are interacting with.

Years ago, I read in a job hunt book something to the effect that, “It’s not the dragons which will slay you, but the mosquitoes.” What the author meant was that it’s the little things which will bring you down, not the big ones. You can show up to an interview with outstanding references and years of relevant work experience under your belt, but if you’ve got a typo on your resume, THAT’S what the interview will notice. Don’t discount the importance of the little things when interacting with colleagues or clients, because they, too will notice – and feel like you aren’t respecting them by bothering to correct.